EaP Index: Association Agreements bring about continued progress in integration with the EU, however state capture holds back further advances

The Representative of the Czech Republic to the Political and Security Committee Tomáš Szunyog, opened the session congratulating the EaP CSF on their work.

“Eastern Partnership should be more about practical implementation of the commitments rather than political statements.”
Tomáš Szunyog

Representative of the Czech Republic to the Political and Security Committee 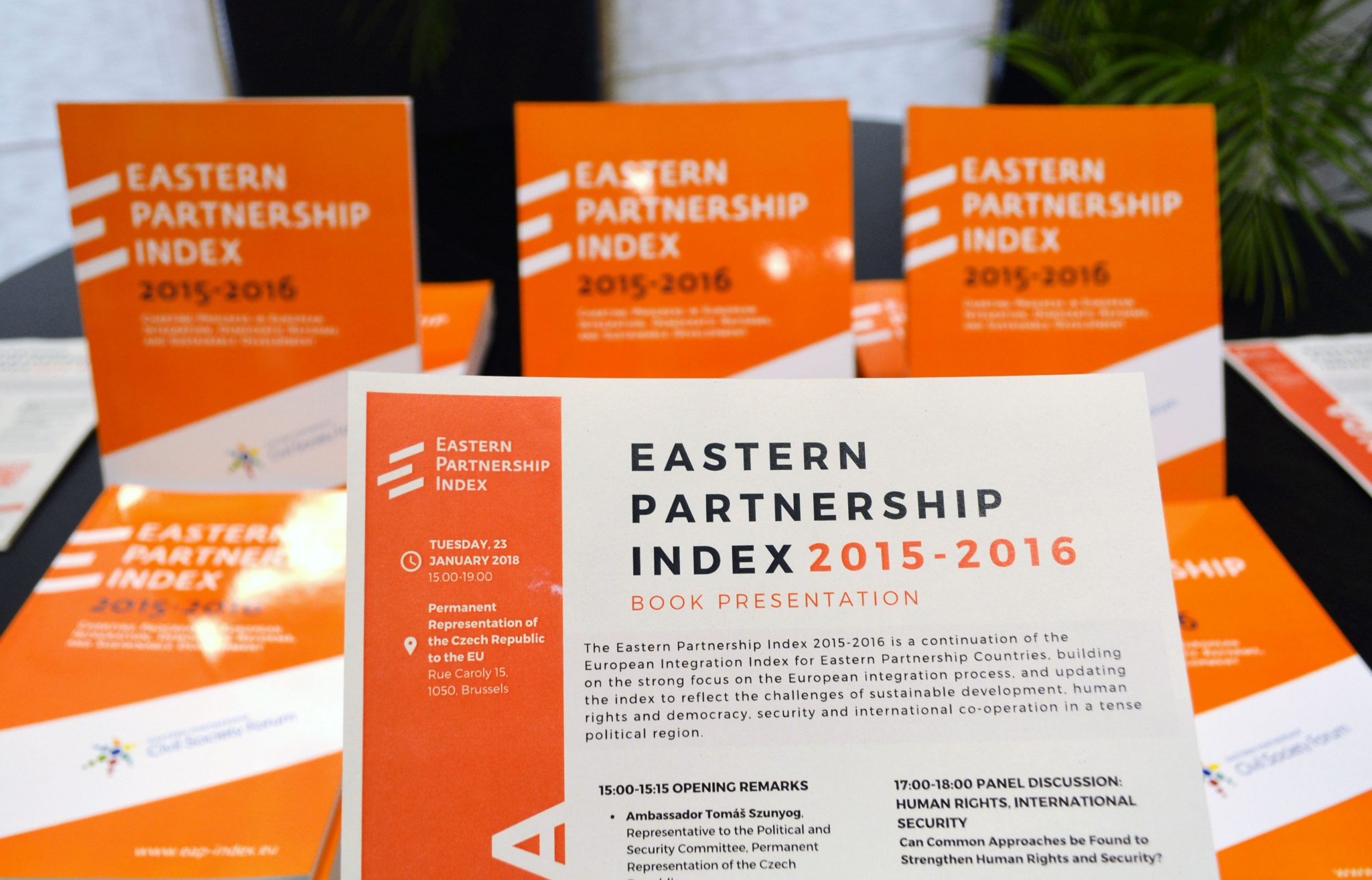 Jeff Lovitt, Editor-in-Chief of the publication, and Rasa Uzdavinyte, Program Manager of the Index, presented the methodology and the challenges faced by over 50 experts who worked on the report. Ms. Uzdavinyte introduced the index as a “snapshot” of the status quo in the six EaP countries under a number of sectoral indicators, especially after the Association Agreements/DCFTAs came into force in Georgia, Moldova and Ukraine. Moreover, she highlighted her concerns over the position of the Republic of Moldova as a front-runner in this issue of the Index, since the current situation presents considerable challenges for maintaining such position. Mr Lovitt added that in all six countries the EU needs to tailor its support to strengthening democracy and the rule of law, and to supporting civil society.
“The Index reflects the need to fight state capture as a top priority where the EU and civil society can come together in Georgia, Moldova, and Ukraine. In Azerbaijan and Belarus, the EU must work for a place at the table for civil society, and apply diplomatic efforts to free political prisoners and foster an independent media. In Armenia, civil society has been vocal in its orientation towards the EU, and strengthened support from the side of the EU is key to the country’s longer-term direction.”
Jeff Lovitt

Editor-in-Chief of the publication

Denis Cenusa from Moldova’s Expert-Grup moderated the first panel on European Integration, Trade and Sustainable Development, which discussed whether the AAs/DCFTAs AAs have a real transformational effect. In that sense, Mr. Cenusa underlined the importance of trade flows, as evidence of economic dynamics and business environment in the countries. Manana Kochladze representing Green Alternative (Georgia) examined Moldova’s low ratings in health related indicators, especially infant mortality rate, and environmental protection. She also mentioned the efforts of Ukraine in implementing environmental policy. Furthermore, Ms. Kochladze encouraged all countries to adjust their policies to the United Nation’s Sustainable Development Goals (SDGs) and to invest in innovation.
“Armenia is a frontrunner in sustainable development, however there is a strong need for restructuring.”
Manana Kochladze

Veronica Movchan from the Institute for Economic Research and Policy Consulting (IER) reviewed the trade indicators. She identified the European Union as the key provider of technical assistance and support to the region. In addition, Ms. Movchan described the main barriers to trade, such as the fact that Azerbaijan and Belarus are not members of the World Trade Organization (WTO), the membership of Armenia and Belarus in the Russia-driven (Eurasian Economic Union) and some setbacks in the three AA/DCFTA countries.
“The EU is the main trade partner for four out of six EaP countries. On trade issues DCFTA countries are much closer to the EU than the rest. Moldova is the leader in standards approximation, however Georgia is moving much slower due to the costs for businesses.”
Veronica Movchan 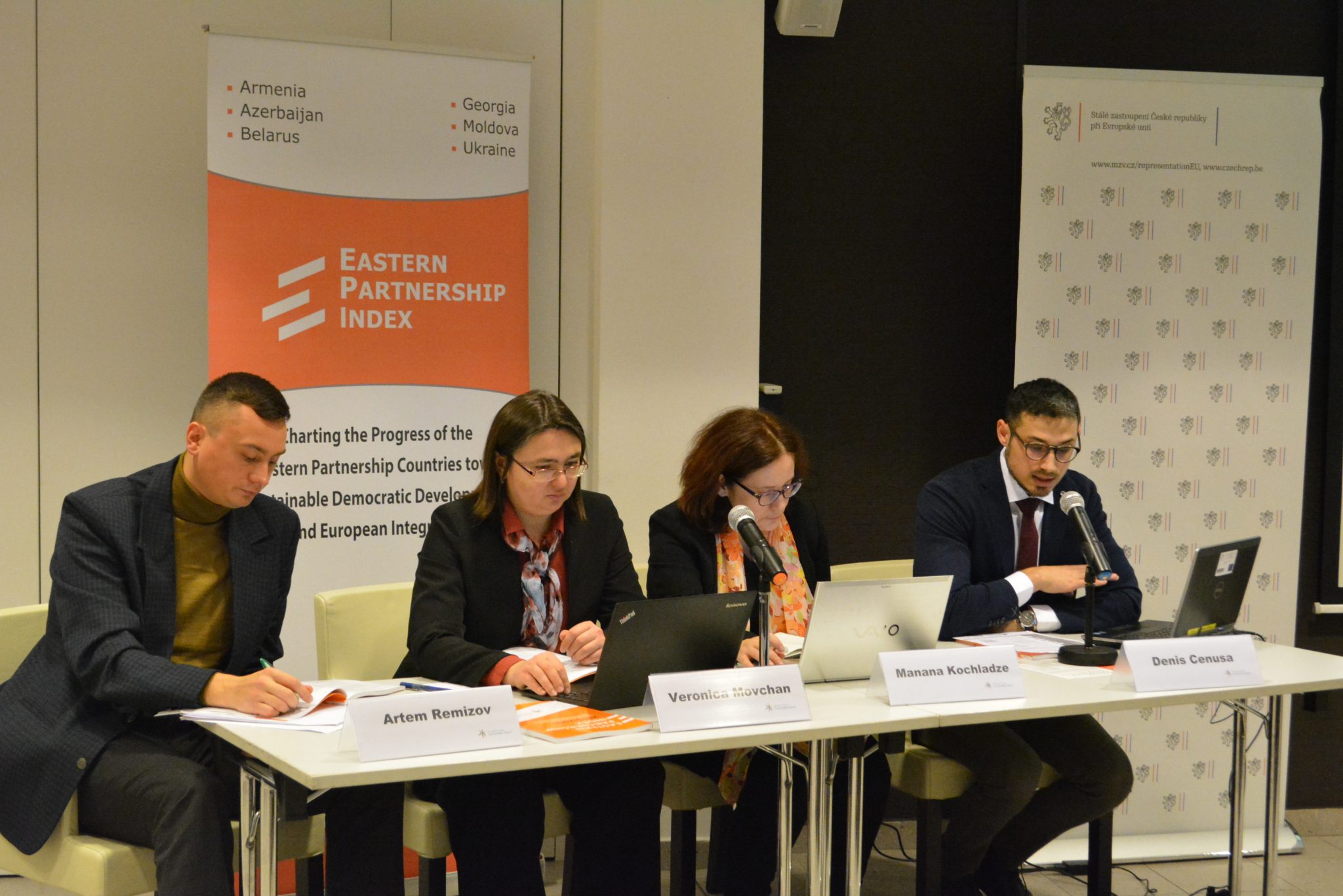 Artem Remizov from the Centre for European Policy Studies (CEPS) suggested that the countries should develop not only linkages with the EU but also stronger ties among themselves. He gave as an example the better performance of the non-DCFTA countries in environmental protection in comparison with Georgia, Moldova and Ukraine.

Boris Navasardyan (Yerevan Press Club) moderated the second panel session on Democracy, Human Rights and International Security. He suggested that the implementation of the non-DCFTA EaP countries’ commitments under the UN conventions in certain areas can lead to a better performance than that of the DCFTA countries. Katerina Zarembo from the New Europe Center (Ukraine) elaborated on the security issues in the region. She mentioned Ukraine as the best performing partner, especially at the level of political cooperation. She also talked about the “ring of fire” related to the number of frozen and active conflicts in the region, which are often used as an excuse for the lack of progress, and referred to the increasing militarisation in EaP countries.

Tamuna Khidasheli, a human rights lawyer from Georgia, clarified why, despite the general perception, Belarus performed worse than Azerbaijan in human rights field in 2015-2016. She explained that the death penalty enforcement and the non-ratification of many human rights conventions resulted in a low ranking for Belarus. She also presented some interesting observation in the areas of media freedom and Internet access. For example, Georgia is the best performer in media freedom while it is the worst in access to the Internet. The lawyer also raised concerns about new restrictions to media in Ukraine and mentioned some limited positive developments in the framework of the EU-Belarus Human Rights Dialogue and the release of some political prisoners in Azerbaijan.

“In Azerbaijan and Belarus journalists are still being imprisoned. In terms of Internet access Azerbaijan is the best performer, however it is the worst in the field Internet freedom.”
Tamuna Khidasheli 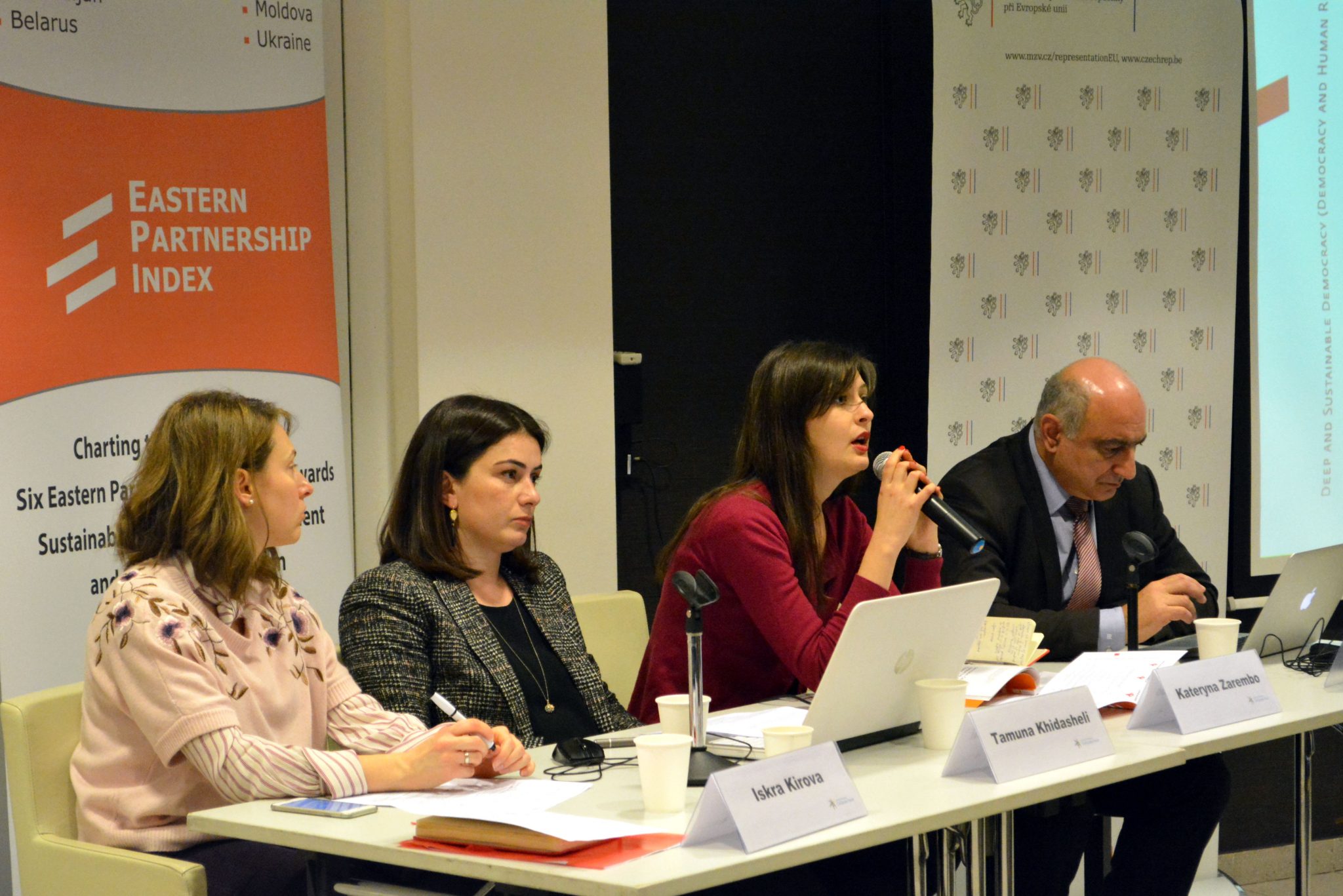 Iskra Kirova from Open Society Policy Institute (OSEPI) stressed that the EU internal challenges, such as the Brexit or the authoritarian drift in Hungary and Poland, have led to the loss in the EU credibility in democracy promotion. She also covered the deteriorating situation in Moldova, especially due to the corruption scandals. Finally, Ms. Kirova suggested that the Index could benefit from the comparisons between the civil society development in the EaP countries and the EU candidate countries.

The project is funded by the European Union, Open Society Foundations, the International Renaissance Foundation, Ukraine (IRF), and the Ministry of Foreign Affairs of the Czech Republic.