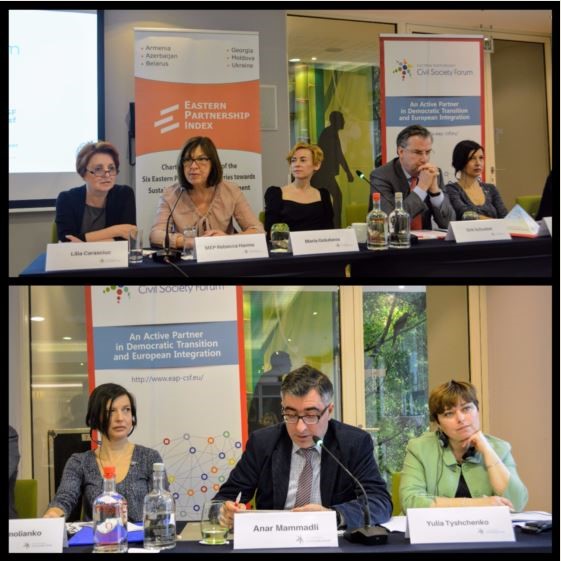 On 11-12 May, the meeting of the EaP CSF Working Group 1 “Democracy, Human Rights, Good Governance and Stability” brought together almost 60 working group members from the Eastern Partnership and the EU countries, as well as officials from the EU institutions (the European External Action Services, European Commission and European Parliament).

The day before WG1 Meeting, the first public side-event titled “Landmark elections in Armenia: turning the tide or preserving the status quo?” took place. The event featured the participation of: Daniel Ioanissyan, Program Coordinator at the Union of Informed Citizens; Sona Ayvazyan, Executive Director of the Transparency International Anti-Corruption Centre in Armenia; Haykuhi Harutyunyan, Protection of Rights Without Borders NGO and EaP CSF Steering Committee member; Boris Navasardian, member of the EaP CSF Steering Committee and President of the Yerevan Press Club, and MEP Heidi Hautala, Head of the EP delegation to the Armenian elections.

“The most active part of networking with the civil society happens online, on social media, where the risk of repression is less imminent” Anar Mammadli

During the opening panel, EaP CSF Working Group 1 Coordinators Maria Golubeva, Haykuhi Harutyunyan welcomed the participants and presented the agenda of the meeting. Nils Jansons (Deputy Head of Division, Eastern Partnership, Regional cooperation and OSCE, EEAS) highlighted the value of the Eastern partnership for the citizens of the six countries and the importance of a tight cooperation with the civil society to achieve the 20 deliverables for 2020. Having introduced the upcoming events related to the EaP, Mr. Jansons identified four main areas of intervention:

Risks and opportunities for the civil society in the EaP countries

MEP Rebecca Harms (the Co-President of Euronest) focused on challenges that civil society still faces in the EaP countries, mainly related to issues such as corruption, freedom of the media and of expression, propaganda, discrimination, climate change and financial aid. Thus, she stressed the need to find opportunities for better cooperation (via the COSME or Erasmus+ programmes), as well as the necessity to strengthen civil society organisations within EaP countries themselves.

A similar view was shared by Dirk Schuebel (Head of Division, EaP Bilateral, EEAS), who also signalled the need for developing the civil societies in order to achieve a meaningful reform process. In his speech, he praised the achievements for each of the six EaP countries, even if a number of areas still arise serious concerns, such as the election situation and the legal uncertainties in Ukraine, the restricting legislation in Azerbaijan that infringes on basic freedoms and the situation in Abkhazia and South Ossetia, where the civil society should be better supported.

Anar Mammadli (Election Monitoring and Democracy Studies Centre) outlined the main risks for the civil society in Azerbaijan, mentioning the political and impediments for activists, including individuals banned from leaving the country. Other problems in the country are the sanctions of NGOs, resulting in many donors and experts leaving the country. Finally, he voiced the need of better support from relevant foreign NGOs and institutions, especially in the area of human rights protection.

Olga Smolianko (Center for Legal transformation) pointed out the lack of change in terms of the problems the Belarusian NGOs are facing and identified four major issues: difficulty to register NGOs; continuous legal issues faced by NGOs; serious problems regarding receiving financial aid; violation of basic rights and freedoms of NGOs and NGO members. In order to improve such a worrying situation and avoid the creation of government-controlled NGOs, there is a need for increased help from the EU and other external observers.

In the same vein, Lilia Carasciuc (Transparency International) highlighted the need for more support from the EU as the Moldovan civil society is under serious threat because of oligarch’s influence in the country and because of corruption, which is the leading problem in the Moldovan political scenario. 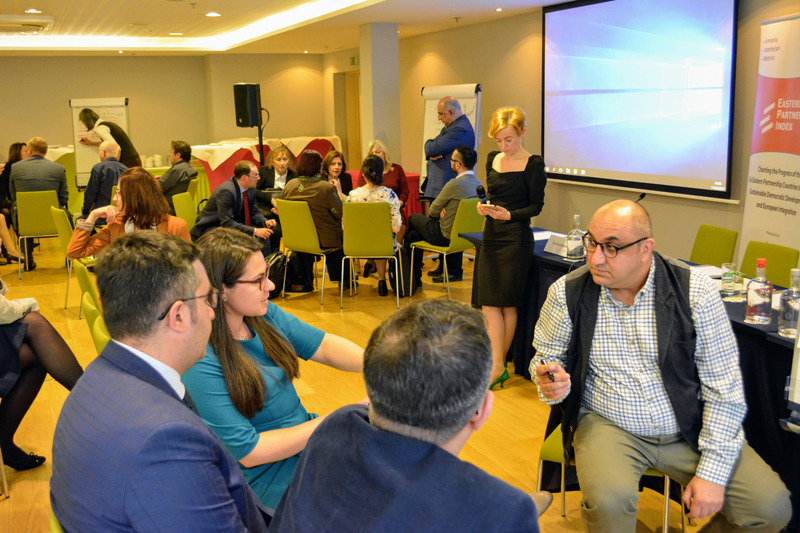 The day continued with four internal sessions, focusing on presentations of results: EaP CSF 2017 re-granting, EaP Index, EaP Policy Brief and EaP CSF Mission to Belarus. As for the re-granting, four out of five EaP CSF 2017 regranting projects falling under WG1 were presented:

The third internal session was organised in the format of the World Café and it was designed to define priorities for the Civil Society Declaration on Eastern Partnership Summit that should be adopted at the Civil Society Conference and EaP CSF Annual Assembly in Tallinn in October 2017.

The day closed with the open side event “How Security Assistance Can Contribute to Defence Reform in Ukraine: Civil Society Perspective” organized in cooperation with the Independent Defence Anti-Corruption Committee (NAKO), Transparency International Defence & Security Programme, marking the launch of the NAKO strategy 2017-2018 and its first report on corruption risks in security assistance.

The second day started with the WG1 Council breakfast meeting, followed by work in three break-out workshops aimed increasing the members’ capacity building in the areas of:

The closing session in plenary summarized the meeting achievements and, finally, a meeting of the Secretariat representatives with the beneficiaries of the EaP CSF 2017 re-granting scheme took place.