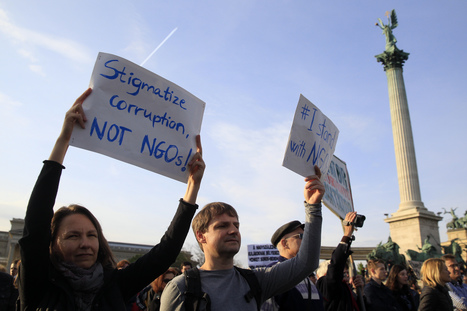 A group of over 40 human rights organizations has recently released a declaration expressing concern for the potential undemocratic limitations to NGO’s work in Moldova. The contested restrictions are contained in three articles that were recently added to the draft law on non-governmental organizations by representatives of the Moldovan Ministry of Justice.

More than one year ago, Moldova embarked on a process of improving its current legislation on non-governmental organizations, as proposed by a group of civil society organizations. During the spring of 2016, the Minister of Justice Vladimir Cebotari gave them the permission to start working on a new law, in collaboration with representatives of the Ministry of Justice.

After one year, the working group released its draft version of the revised legislation, which was conceived in total independence and freedom from any political pressure. As a result, the final version of the draft law is fully in line international standards and best practices and it is ready to be promoted for adoption. The draft was also endorsed by international experts and was subjected to public consultations in September 2016.

At the beginning of July, however, representatives from the Moldovan Ministry of Justice presented the other members of the working group an additional set of three articles, in clear contradiction with the democratic principles that characterized the draft prepared by the rest of the group.

The additions include “special provisions on political activity of non-governmental organizations”, which significantly limit the activity of NGOs and establish prohibitions for their direct or indirect financing. The adjustments also aim at additional financial transparency rules for all organizations that benefit from financing outside Moldova, with rather severe consequences for failing to comply with them. On top of this, NGOs of the working group were informed by representatives of the Minister of Justice that the final version of the draft to be promoted will be ultimately decided by the Ministry of Justice Cebotari.

The NGOs reacted to this with a declaration, opposing the last-minute amendments and expressing concern over the working environment of NGOs in the country, which could turn out to be far more restrictive than at present. The proposed measures would deprive the majority of NGOs that are active in promoting participatory democracy of their major source of funding, but are also contrary to the Association Agreement between Moldova and the EU.

As a consequence, the organizations that signed the declaration call on Moldovan authorities to start promoting without further delay the draft law as initially prepared by the working group, without the three articles that will substantially hamper the work of NGOs. They also appeal to the diplomatic community and development partners of Moldova to closely monitor the civil society environment in the country and to take the necessary measures to ensure their free and independent activity.