In this Panel, EaP CSF representatives, Ihor Samokhodsky (Better Regulation Delivery Office, Ukraine) and David Tsiskaridze (N(N)LE International Business and Economic Development Center, Georgia) highlighted the importance of continuing the joint EU-EaP efforts towards developing the digital economy of all EaP countries with the aim to enhance economic and business opportunities in the region.

Under the ‘Together for a resilient digital transformation’ pillar, the HDM panel featured a rich exchange between EU and EaP stakeholders on the post-2020 deliverables. Together with Mathieu Bousquet (Head, Georgia and Moldova Unit, DG NEAR), Artuūras Piliponis from the EU4Digital facility outlined the nine primary ideas currently under consideration by the European institutions, touching on digital infrastructure, eGovernance, digital economy and innovation, and cybersecurity.

WG2 member David Tsiskaridze called for great ambition in a number of areas, suggesting that the target for ‘digitally empowered EaP citizens’ should be raised from 1 million to at least 3 million, and that measures to boost digital skills should be extended to businesses of all sizes, not just SMEs and start-ups.

He also proposed the creation of a common e-skills and e-competence framework, and the establishment of targets for the digitalisation of cultural heritage, harnessing the opportunities provided by information and communication technologies for the collection, access, application and visualisation of data about the rich cultural heritage of the EaP countries.

In addition to the future deliverables, the Panel meeting also addressed a number of projects currently underway, including two landmark telecommunications agreements currently being concluded between the EaP states. The first – a Regional Roaming Agreement (RRA) – will seek to slash roaming charges among the six EaP countries by 87% by 2026, while the second – a Regional Spectrum Agreement (RSA) – aims to harmonise usage of spectrum resources across the EaP region and align future innovations in the area of telecommunications with European standards. With the outstanding issues due to be ironed out in the coming weeks, there is a very real possibility that these two landmark agreements could be signed at the upcoming EaP Summit, scheduled for early 2021.

Civil society representative David Tsiskaridze welcomed steps towards greater regional cooperation in this area, but once again called for greater ambition. In his view, should the RRA achieve its stated objectives by 2026, that progress could well serve as the basis for an EU-EaP common roaming space, and for the EaP countries’ greater integration into the EU Digital Single Market.

The discussion on the new deliverables beyond 2020 will be continued at Platform 2 meeting on November 20. 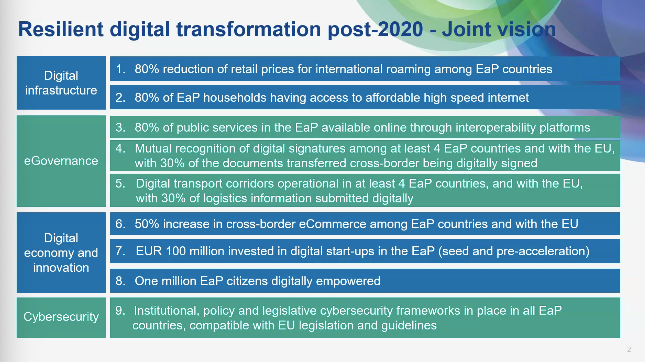