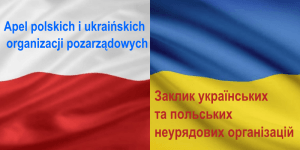 Polish-Ukrainian relations have deteriorated and threaten to get worse after the Polish parliament passed a resolution in July accusing Ukrainians of committing in 1943 genocide on tens of thousands of Poles living in Volhynia. The Verkhovna Rada is planning to react with its own resolution recalling the persecution  Ukrainians suffered before 1939, when Volhynia was under the Polish rule, and the deaths of Ukrainians at the hands of Poles during the World War II.

EaP CSF Co-chair Krzysztof Bobinski and Hennadij Maksak, SC Member of the Ukrainian National Platform, have initiated an appeal to politicians not to use the tragedies of the past for their own ends. Civil society organizations from both countries should work together not to jeopardize the progress made so far in the work of reconciliation between the two peoples. The results of the work conducted by civil society and the leaders of the two countries is currently under threat.

Signatures are being collected in support of the appeal which will be presented to the parliaments of the two countries.