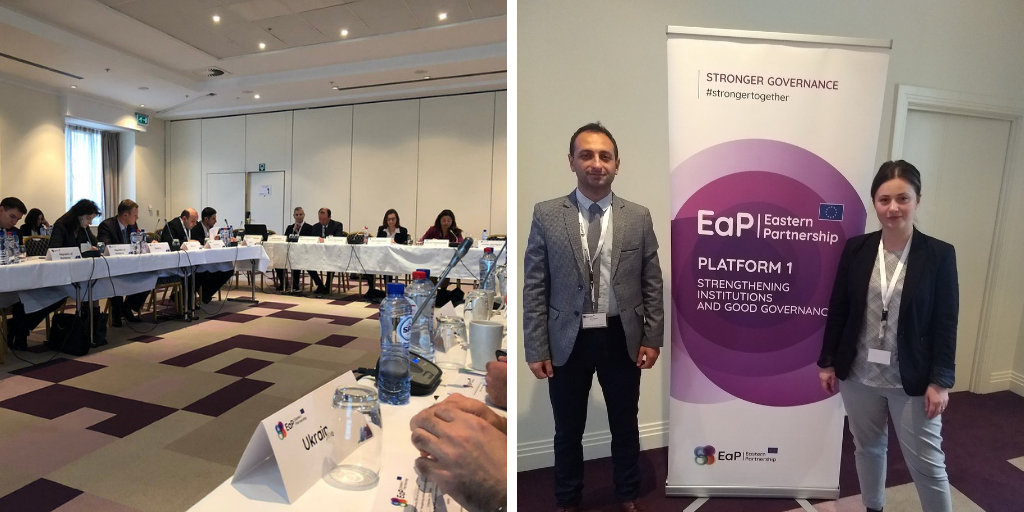 On 19 November, Eastern Partnership Civil Society Forum (EaP CSF) participated in Eastern Partnership Panel on Security, CSDP – Common Security and Defence Policy and Civil Protection, held under Platform 1 “Strengthening institutions and governance” in Brussels. The discussions, taking place under the auspices of EEAS, DGs NEAR and ECHO, touched on the current state of play, as well as questions pertaining to civil protection, risk management and cyber-security.

Representing EaP CSF, Mariam Grigalashvili (GIP – Georgian Institute of Politics) and Zaur Akbar (Youth Atlantic Treaty Association, Azerbaijan) spoke of the civil society concerns in the EaP region – in line with a recent EaP CSF position paper on the topic, entitled “Effective response to EaP countries expectations in the security area and the role of civil society”. The position paper is a result of joint input from EaP CSF Working Group 1 “Democracy, Human Rights, Good Governance and Stability” members, all of whom are locally based – representing organisations in Georgia, Moldova and Ukraine.

The position paper spells out a set of recommendations – on enhancing security cooperation within EaP, using the existing human rights protection mechanisms to counter and prevent abuse in conflict areas and joint action, in responding to hybrid threats. Unfortunately, “the EaP region is neither stable nor safe” starts the position paper, listing the existing conflicts in Ukraine, Moldova, Georgia and Azerbaijan. It continues: “one of the Eastern Partnership’s priorities is to strive for stability and security” – a point, which still needs to be addressed, despite pledges made at the EaP Brussels Summit in November 2017 and in 20 Deliverables for 2020.

That said, Deliverable 12: “Stronger security cooperation” – which incorporates cyber-security and hybrid threats, already provided “positive results at various levels”. To hone further synergies, “civil society suggests considering adding [new] targets and milestones”, proposes the paper. These new measures should ideally include “an intergovernmental security platform”, facilitating the involvement of the EU in counteracting hybrid threats and settling lasting conflicts. There are also a number of existing initiatives that could and should be supported – such as the swift adoption of the Operational Action Plan on intelligence and firearms trafficking or the move to establish a multilateral EaP Cyber-security Centre, floated by Ministry of Foreign Affairs of Ukraine.

In their contributions, Grigalashvili and Akbar spoke of the existing security commitments, addressing some of the stakeholders present at the Panel. Grigalashvili expressed concerns over the limited mandate, which prevents EUMM – European Union Monitoring Mission in Georgia from taking action in the occupied areas. Akbar, on the other hand, raised a general point on EU’s security agenda in the neighbourhood, in light of its complex relationship with the US and NATO.