Landmark elections in Armenia: turning the tide or preserving the status quo? 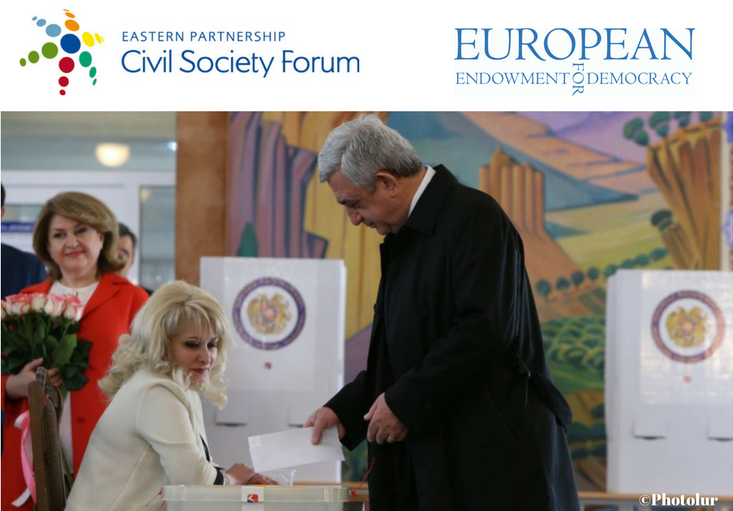 “If there is any message contained in the elections, it is that Armenians expect deep and comprehensive reforms and we as the European Union will support that” (Piotr Switalski, EU ambassador to Armenia)

“Reform is a never-ending process, and we encourage the parliamentary majority and the new government to continue their efforts to transform the country’s political culture, in partnership with the opposition, civil society and the international community.” (Ignacio Sanchez Amor, Special Coordinator and Head of the short-term OSCE observer mission)

In the wake of recent pivotal elections in Armenia, the Eastern Partnership Civil Society Forum (EaP CSF) and the European Endowment for Democracy (EED) cordially invite you to an event with prominent civil society and institutional specialists. Discussions will look at the impact of civil society on improving electoral practices and longer-term ramifications of the vote for both Armenia, as well as the wider region.

To what extent did election stakeholders succeed in improving Armenia’s electoral culture? How has this election changed Armenia’s political road map? Are there any best practices that may be shared with other countries? And what does this election outcome mean for the region? With Armenia set to sign a partnership agreement with the EU later this year, reflections on these issues are timely.

Armenians went to the polls on 2 April 2017 for the first time since the country’s decision to transform into a parliamentary republic. Against a backdrop of widespread disillusionment in the electoral process, civil society worked to increase voter literacy, fight against electoral fraud, monitor media coverage, and bolster voter confidence with trained observers covering around 90% of the country’s polling stations.

Ahead of the vote, the EU and other international players, including the US, Germany, and the UK, invested more than 8 million EUR to support the authorities and build trust among the voters towards the electoral system.