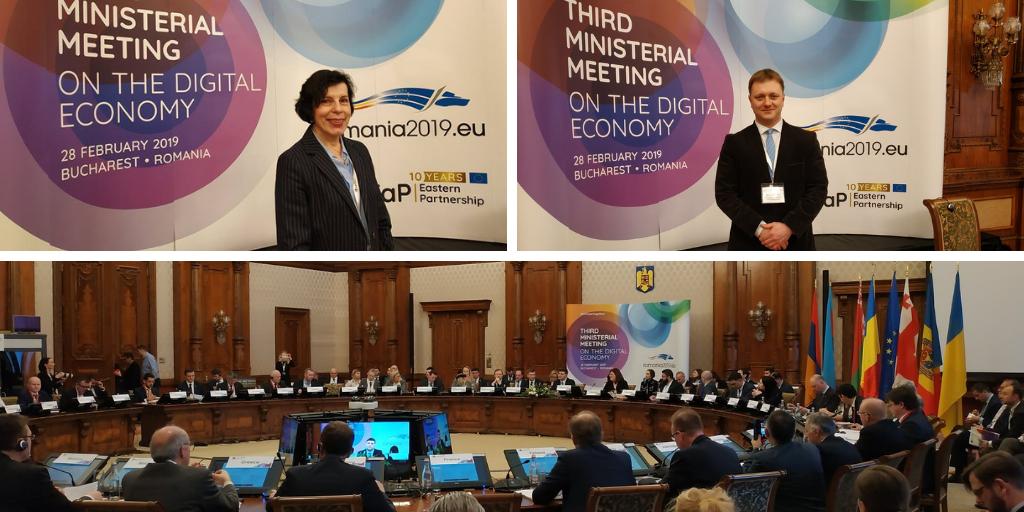 On 28 February, Eastern Partnership Civil Society Forum (EaP CSF) took part in the 3rd Eastern Partnership Ministerial Meeting on Digital Economy in Bucharest. The event was jointly organised by the Romanian Presidency of the Council of the European Union and European Commission – with Andrus Ansip, Vice-President for the Digital Single Market in attendance. EaP CSF had a speaking role, with Maksym Koriavets (Polissya Foundation for International and Regional Studies, Ukraine) and Marianne Sokolova (Baltic Internet Policy Initiative, Belarus), jointly delivering a speech prepared especially for this occasion.

“We welcome the launch of the EU4Digital Initiative – which will further strengthen digital economy, fight digital illiteracy and open up societies”, said Koriavets. Aside from boosting transparency, the expectation is that EU4Digital will “jumpstart the process of reduction of roaming tariffs within the EaP region”. In her speech, Sokolova highlighted the need to encourage more accountability, as an imperative for “an inclusive and efficient multistakeholder cooperation”. The same is true the cross-cutting Deliverable on gender equality and non-discrimination: it should become an essential part of the EaP HDM strategy.

The Digital Economy Ministerial addressed the benefits that come with the Digital Single Markets – and how these can be transposed to Eastern European partners. One of the key outcomes is the statement on the Regional Roaming Agreement roadmap, which drew on the recent EaP Panel on HDM – Harmonisation of Digital Markets (7 February 2019, in Brussels). The Panel meeting, which benefited from Koriavets’ and Sokolova’s (written) input, had also prepared a Declaration – which was in turn adopted at the Ministerial in Bucharest.