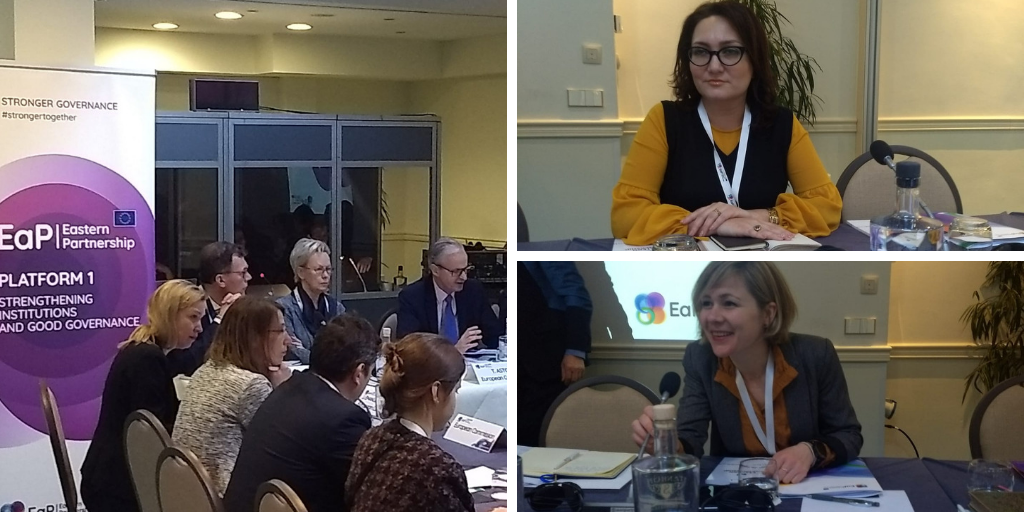 Unfortunately, even though there are some “legislative accomplishments”, the overall progress is rather limited – and the region as a whole is facing “backlash for implementing women’s rights and gender equality agenda”. One of the major obstacles, identified in the paper, is that “domestic and gender-based violence Is still not addressed as a societal problem”. “A general gender discriminatory practice stands behind gender-based violence and domestic violence – a holistic approach is needed”, repeated Ismayil in her contribution.

In committing themselves to 20 Deliverables for 2020, the governments of EaP countries set themselves the goal of adopting domestic violence legislation by 2020 – but so far, Georgia remains the only state which has substantially aligned its legislation to international standards. In this context, it is important for civil society to “push for the ratification of the Council of Europe Convention on Preventing and Combating Violence against Women and Domestic Violence”, commonly referred to as Istanbul Convention. The ratification and implementation of Istanbul Convention in the EaP countries is one of this year’s WG Re-granting projects, precisely focusing on prevention, protection and prosecution.

In her address, Strive highlighted the problem of under-reporting and lack of reliable data: “it is important that the local authorities and the civil society work in tandem in collecting data on sexual and domestic violence”. This is the key component in devising successful preventative programmes – for all involved, the victim, perpetrator and society as a whole. Summing up, there is a need for “a long-term strategy to combat sexual and domestic violence”, said Strive – and this is where civil society can get involved.

The day was broken into three interconnected thematic sessions, focusing on domestic violence legislation and its effective implementation, referrals and preventive programmes for perpetrators. The sessions were chance to go through the situation in each of the six EaP countries – with designated slots for interventions from civil society and EU member states. When we engage in debate on domestic violence, we should remember that “change requires political will, capacities and resources”, concluded up Ismayil.