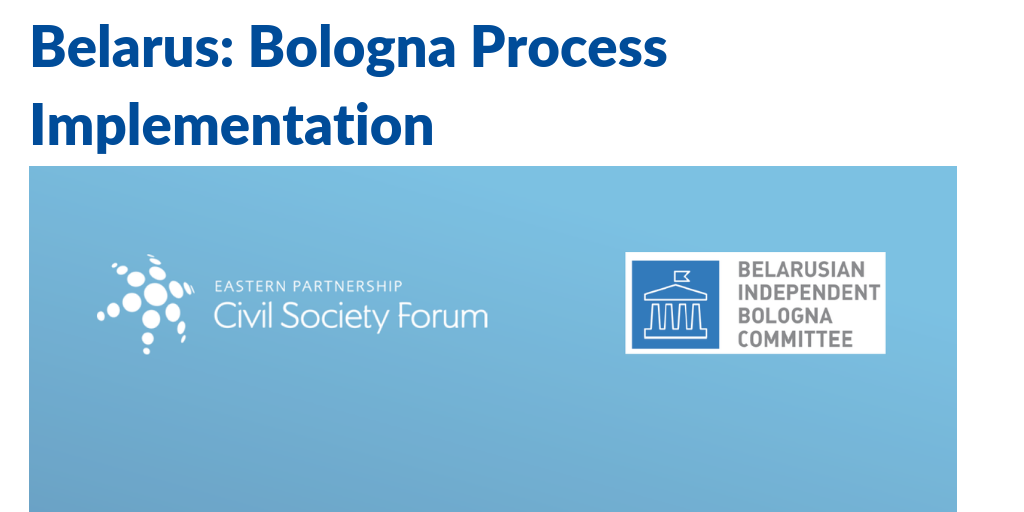 The information submitted by Belarus to the European Higher Education Area in 2018: Bologna Process Implementation Report is largely misconstrued, showing need for a monitoring implementation procedure – similar to Advisory Group on Support for the Belarus Roadmap (AG2) and active participation of civil society.

The message from the Belarusian Independent Bologna Committee (BIBC) and Eastern Partnership Civil Society Forum (EaP CSF) Belarusian National Platform Ad Hoc Committee is clear: Belarus is still in need of a special Bologna Follow-Up Group (BFUG) assistance – we read in a memo addressed to BFUG, ahead of its planned meeting on 27 September 2018. The concern is that the mandate of AG2 is now over, after presenting its progress report at 2018 European Higher Education Area (EHEA) Ministerial Conference, held on 24-25 May 2018 in Paris.

The signs, coming from both 2018 EHEA Implementation and AG2 final report, are worrying and present ample evidence that Belarus is still a long way away from implementing its Roadmap for Higher Education Reform. Given the input presented by the Belarusian authorities, as well as limited progress on the ground, this is a task that is proving to be increasingly more difficult for the country to confront on its own.

The earlier-mentioned BIBC-EaP CSF Belarusian National Platform Ad Hoc Committee Memo to BFUG goes through a list of factual inaccuracies and omissions, identified in 2018 EHEA Implementation Report. There are at least six areas in which the information relating to the Belarusian higher education system is either incorrect, or inconsistent with EHEA values and ways of monitoring:

• Bologna architecture: inclusion of third cycle, or doctoral programmes, in the Belarusian higher education system – which still requires a change in current legislation

• European Credit Transfer and Accumulation System (ECTS): though included in the Report, are currently not used in Belarus

• Recognition: which still resides with the Belarusian Ministry of Education and questions relating to the Lisbon Recognition Convention, including assessment of learning outcomes

• Employment: use of compulsory work placement programmes, as a way of by-passing the obligation to assist students in transitioning from study to work – which was also noted by the AG2 report

• EHEA Fundamental Values: particularly when referring to institutional autonomy and support of gender equality, political and religious tolerance, as well as civic and democratic values – across the education system

This “distorted assessment” serves no purpose, claim the authors of BFUG memo. It is neither useful nor effective strategy in addressing the challenges put by the Bologna Process. “It is difficult to assess whether it has been done on purpose or it is a result of incompetence”, we read. What comes across is the need for a special monitoring procedure and further engagement with civil society, which guarantee the successful integration of Belarus into the EHEA.